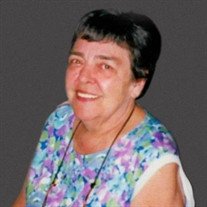 She was born in New Memphis, IL; she and her family moved to Highland in 1948. She graduated from St. Paul High School in 1954. She worked at the Piggly Wiggly Supermarket and the IGA in Highland. She also helped her husband in the operation of his Phillips 66 Gas Station; and later the Garage on Washington in Highland. Until retiring in 1999, she had managed the VFW Post Hall and Lounge for some 5 + years. She and her husband enjoyed camping and often spent the week-ends camping at the Highland Sportsmen’s Club. She also enjoyed playing cards, crocheting, bowling and playing bingo.