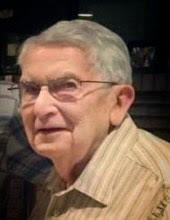 Memorials can be made to the Woodside Community Church and Oakdale Christian Academy. Donnell-Wiegand Funeral Home in charge of arrangements. Online condolences may be made at www.donnellwiegand.com

Phillip and his family lived a hard life moving frequently from Minnesota to Indiana to Wisconsin living on farms or wherever work was found. Consequently Phillip was a hard worker doing whatever it took (hospital orderly, mail carrier, store clerk, substitute teacher, bus driver, turkey plant worker, carpet layer) to provide for the love of his life Phyllis Barrett whom he married on September 8, 1949 and for his children Vicki (Alvin) Rice, Becki (Daniel) Jewett, Timothy (Nancy) Ward, Wendy (Roger) Quisenberry, and James (Kimberly) Ward.

While Phillip’s younger depression era life taught him many valuable lessons in resiliency, his formal education gave him life skills. Phillip graduated from Burlington Wisconsin High School in 1946 and immediately joined the Army Air Force. During his enlistment he was recommended to attend West Point but declined a military career. His Air Force service saw him trained as a clerk typist and deployed to Japan and Korea where he served on a supply instruction and inspection team. He then was sent to Germany during the Berlin Air Lift helping facilitate plane maintenance supply materials. After his military service Phillip graduated from Carroll College (Waukesha, WI) in 1953 with a BA in Business Administration and minors in Psychology and Religion and with a Masters of Divinity from Asbury Theological Seminary (Wilmore, KY) in 1956.

During Phillip’s junior year at Carroll College he recommitted his life to Christ and felt the call into the ministry. During his long ministry career Phillip with his faithful helpmate Phyllis pastored Wisconsin Free Methodist churches in Barron, Steven’s Point, Richland Center, Milwaukee and New Berlin. Following New Berlin, Phillip served as Superintendent of the FM Illinois-Wisconsin conference from 1969-1977. After that “the Phils” moved to Winona Lake, IN where Phillip worked in the Light and Life Press financial department and later as Director of General Services.

In 1980 Phillip and Phyllis moved to Greenville, IL where Phillip pastored the FM church in Coffeen and worked with a local CPA. A year later in 1981 the Phils accepted a pastorate for the Midwest City, OK FM church until 1992. The couple then temporarily retired back in Greenville before moving to Linden, MI and from 1996-1999 pastored the FM church in Fenton, MI. In 1999 Phil and Phyllis returned to Greenville where Phillip filled the pulpit of several area churches but most regularly at Woodside Community Church. In addition to pastoring for over 60 years, Phillip served as a Free Methodist denominational correspondence Instructor in Polity and Doctrine and as a teacher on The Acts for 26 years.

Beyond his professional accomplishments Phillip, Phil, PD, or Flip is remembered by those who call him Dad or Grandpa as introverted with a great sense of humor, a fisherman, typist whiz, quick with numbers, enjoying holding his baby grandchildren, often seen gardening in his suit, painter (rooms not portraits), reader, chess player, stamp collector, prankster and a prayer warrior for family, friends, and caregivers. Phil will be missed by many following his transfer to heaven where he was united face to face with his Savior and reunited with a host of family and friends on Tuesday November 17, 2020 at 3:49pm central.