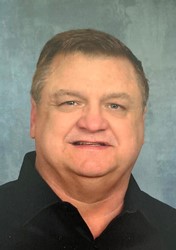 David Daniel Bogue, 58 of Whitsett, NC passed away peacefully on December 16, 2020. He courageously battled Diabetes and other medical conditions throughout his life. He was born in Greenville, Illinois. A 1981 graduate of Greenville High School, David worked in construction sales and as a truss designer.

He is preceded in death by his Step-Father and mother, Eugene and Annella Baumann, and grandparents, Walter and Bessie Hammer and David and Mildred Bogue.

David enjoyed many lifelong friends from Greenville and the surrounding area where he was raised. He spent many youthful days playing at the farm of his grandfather, Walter Hammer. As a young child, he drove the tractor into the creek so his grandfather thought it best to teach him to drive at the age of twelve. He lived life to the fullest and lived in several parts of the country. He loved to follow and argue politics with anyone that was up for the challenge. David will never be forgotten.

A memorial service is being planned at Donnell Wiegand Funeral Home in Greenville for some time in 2021 when it is safer to gather. For those who desire memorials, in David’s memory, may be made to the Simple Room in Greenville.