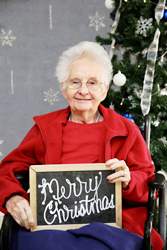 Fay was a devoted daughter, wife, mother, grandmother, and great-grandmother. She loved spending time with family and friends, and time with her grandchildren and great-grandchildren was especially cherished. Prior to her marriage, she trained as a cosmetologist and owned her own beauty shop. She enjoyed being a homemaker and gave her time volunteering as a sacristan, housekeeper, and head of the decorating committee at St. Dominic Catholic Church in Breese. She was an active member of the St. Dominic Altar Society. Her many interests include baking, sewing, gardening, quilling, and watching the St Louis Cardinals. She was also proud to be a member of the Daughters of the American Revolution. Fay was an amazing woman, one who demonstrated spirit, determination, and tenacity. She instilled these qualities into her family.

A private funeral mass will be celebrated at St. Dominic Catholic Church in Breese with Fr. Patrick Peter officiating. Interment will be at St. Dominic/St. Augustine Cemetery in Breese.

Memorials may be made to St. Dominic Catholic Church and will be received through Moss Funeral Home, 535 N. 5th, Breese, IL 62230 who is serving the family.