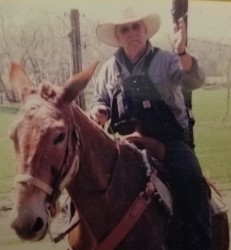 Mr. Kimbro was born November 27, 1941, in Coffeen, IL, to the late James Lester & Evelyn V. (Harrison) Kimbro. He had attended Hillsboro High School in Hillsboro, IL. Mr. Kimbro married Maud E. Furlow and they later divorced. He then married Patsy (Matthews) Harlow, on July 1, 1995, and she survives in Coffeen, IL. He had worked as a Heavy Equipment Operator with Operating Engineers Local #150 in Countryside, IL and he was also East Fork Township Supervisor for 20 + years. Mr. Kimbro was a member of Mt. Moriah Baptist Church in Coffeen, IL; Donnellson Masonic Lodge and Mt. Moriah Cemetery Board. He loved spending time with family, being on his farm, loved animals of all kinds and he loved hunting, fishing and trapping.

Memorials are suggested to Mr. Moriah Cemetery in Coffeen, IL.