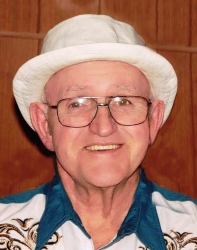 After his service in the United States Army, Jim worked at the Air Conditioning Plant in Greenville, he farmed, and he worked at Crane Packing Company in Vandalia. He also hauled grain, hauled mail, retrieved trucks for John Hollenkamp. Jim also owned and operated Jim’s Septic Service for 36 years. He served as the Irishtown Township Road Commissioner for 23 years and served as township trustee. Jim was a member of the Keyesport United Methodist Church, O’Fallon Lodge No.576, A.F.&A.M., and the Vandalia Moose Lodge 1447. Jim loved making friends, talking to others, and telling stories.

Visitation will be held at Zieren Funeral Home on Wednesday, December 30, 2020, from 3:00-6:00 PM. Masks and social distance requirements will be followed at the visitation. A Private funeral service will be held. Expressions of sympathy in his memory are suggested to St. Jude Children’s Research Hospital or to the Alzheimer’s Association. Memorials and condolence cards will be accepted through Zieren Funeral Home, PO Box 276, Carlyle, IL 62231. Online condolences may be shared with the family by visiting www.ZierenFuneralHome.com.