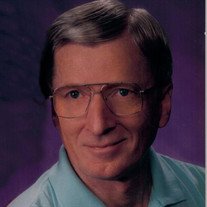 He was born on Sunday, August 03, 1930, in Grandfield, OK, the son of Michael and Eva (nee Schauwecker) Schauwecker.

He was a member of VFW Post 5694-Highland (Past Commander, Life Member, Adjutant 12 District and All State Post Commander); Paperworkers Local 1515.

John was born in Grandfield, Oklahoma and moved to Highland (north of Pierron) at the age of seven. In 1946, his family moved south of Highland to the Sebastopol area. After his graduation in 1948 from Pocahontas, he worked for the Highland Box Company. He joined the Army in 1951, serving his basic training in Hawaii with duty in Korea. After his military service, he went back to work for the Highland Box Company, where he was a dye maker for 46 years; retiring from the new owner, Smurfit Stone in October of 1994. After retirement he was a courier for First Mid Bank, Pocahontas and Highland; worked at Rural King for five years and Highland Home for five years. He enjoyed woodworking, gardening, bowling with the Journal Printing team, listening to country music, watching baseball and football with his family and his greatest pride and love was his two sons Kurt and Mark and six grandchildren. He was looking forward of becoming a great grandfather and he and Karen were married 52 years.

Memorial contributions may be made to Bond County Hospice.