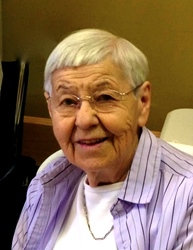 Leona was born April 18, 1924, in Old Ripley Township, Bond County, Illinois, the daughter of Emil and Ida (Essenpries) Mollet. She was the youngest of 10 children, and the last surviving sibling. She attended IXL, Fairview, and Mt. Vernon country schools and graduated from Greenville High School, Greenville, Illinois, class of 1942, after which she worked at Harper’s Cleaners in Greenville as a receptionist. Later she worked as secretary for Bond County States Attorney Robert F. Smith.

On June 9, 1945, she and Kenneth H. (“Bud”) Kersch of the Hookdale area were united in marriage at the Hookdale Evangelical and Reformed Church (now United Church of Christ). They settled on Cart Hill farm in 1951 and remained there for 70 years farming and building a quality, registered Holstein dairy herd.

Leona was an active farm wife assisting in milking cows, hauling grain, raising chickens, cooking for farm hands, gardening—both flowers and vegetables–canning, and maintaining the house and yard. She was an active member of St. Peter United Church of Christ, as well as of the Women’s Guild of the church. For many years she participated in the Bond County Church Women organization, as well as the Utlaut Hospital Auxiliary and the Hospital Bazaar.

Because of COVID-19, there will be no visitation or funeral at this time. A private graveside service will be held at Mt. Auburn Cemetery, Greenville, IL. on Thursday, December 10, with Donnell Wiegand Funeral Home in charge. A Celebration of Life gathering will be held at a future date.

Memorials may be made to: St. Peter United Church of Christ, Mt. Auburn Cemetery Association, or Eden’s Glory, and may be mailed to Donnell Wiegand Funeral Home, 203 W. Oak St., Greenville, IL 62246.