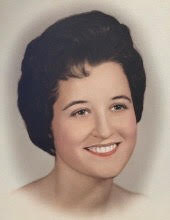 Graveside funeral services will be held 11:00 a.m. Thursday, December 31, 2020 in Mt. Auburn Cemetery with Pastor Deborah Somerville officiating. Family visitation will be held prior from 10:00 – 10:45 at the Donnell – Wiegand Funeral Home in Greenville. Friends are welcome to the service at Mt. Auburn Cemetery, masks are asked to be worn and socially distance as best we can. Memorials are to be given to the Greenville Free Methodist Church, 1367 IL Rt. 140, Greenville, IL 62246.

Surviving is her daughter, Lisa Barber and husband George of Greenville, Illinois. Loving grandmother to Benjamin (wife Briana), Zachariah, Mary Ashley, Abigail and Samuel. She is preceded in death by a brother James Robert Dodd of Winston-Salem.