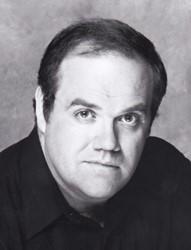 Robin was born October 5, 1962 in Blue Island, IL, the baby of three sons born to Earl Leslie McGee and Nancy Ann (Bentley) McGee. He was raised in Sauk Village, and graduated from Bloom Trail High School, Chicago, IL in 1980. Robin followed his brother Rick to Oklahoma, and attended Oklahoma Baptist University for a time. He was a gifted performer, and showcased his talents, both acting and writing, and on occasion, singing. He worked in commercials and local plays, and his favorite were murder mysteries. Robin began acting as a freshman in high school , and was particularly valuable because he could grow a full beard as a 14-year-old! He had a long and storied career as a character actor in movies, including the original “Robocop” and the more recent “Lone Ranger” movie with Johnny Depp. He also had a lead role in a Christian movie entitled “No Turning Back”. Robin was in hundreds of television commercials and industrial films, including many for the Dallas Cowboys and even ESPN Sports. He was also familiar with the stage, performing in musicals such as “The Rocky Horror Picture Show”, “1776”, and “The Smoky Mountain Passion Play” in Tennessee. But Robin was mainly known for his prolific writing and acting skills in Murder Mysteries. He was gifted in his comic performances and could carry a play all by himself. Since moving to Oklahoma, Robin had become a favorite at First Baptist Church in Wayne, where his brother Rick preaches. His murder mystery dinner theaters raised thousands of dollars for young people and children to go to summer camps. Robin brightened the Christmas season by performing in many Christmas plays and musicals at the church. Robin loved life and lived each day to the fullest.

He was a wonderful son, brother, uncle and friend, who will be dearly missed!

He was preceded in death by his mother, Nancy McGee.

Robin is survived by his father, Earl McGee of Purcell; brothers, Rick McGee and wife Nancy of Wayne, OK, and Randy McGee and wife Pam of Springboro, OH; several aunts and uncles, nieces and nephews, and a host of other family and friends.

Visitation and Funeral Ceremony: The family will receive guests from 12:00 p.m. until the time of the funeral ceremony at 1:00 p.m. on Monday, December 21, 2020 at Perfetti-Assalley Funeral Home, 201 S. Main Street, Sorento, IL 62086, with Rev. Rick McGee officiating.

Interment will follow the ceremony at Sunnyside Cemetery in Sorento.

Wilson-Little Funeral Home of Purcell, OK was entrusted with services in Oklahoma.