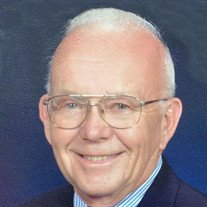 He was born on Monday, November 20, 1933, in Highland, IL, the son of Rupert and Helen (nee Geismann) Schwarztrauber, Sr..

Born at Highland, IL; graduated from St. Paul Grade School in 1947. He attended Pontifical College Josephinum at Worthington, OH, for high school and 3 1/2 years of college. He graduated from St. Louis University in 1956 with a BA in History. Mr. Schwarztrauber served in the US Army from 1956 to 1958 with the 158th Army Band-Ft. Knox, KY. In 1958 he began working at General American Life Insurance Company in administration. He became a manager of the Individual Claim Department, then a consultant and finally the first team leader for the company in the individual underwriting and service area. He was a member of the International Claims Association and served on several committees for that organization. As a member of the Education Committee, he helped author several textbooks for claims handling. During his years at work, he also served as a Loaned Executive for the United Way of Greater St. Louis for many years. He retired after 37 years of service in 1995. In retirement, he enjoyed being with family and friends. He enjoyed volunteering. He was a charter member of the Jaycees and a member of the Knights of Columbus. He served on the board of directors for Faith Countryside Homes and the Louis Latzer Memorial Public Library. He was a past president of the St. Paul Parish Council and the St. Paul Board of Education. He also directed the St. Paul Adult Choir for more than 50 years. In the 60’s and 70’s he directed a St. Paul High School singing group called the Small Society. He enjoyed reading, flower gardening, playing the piano, traveling and attending sporting events.

Memorial contributions may be made to St. Paul School Educational Foundation or Faith Countryside Homes.