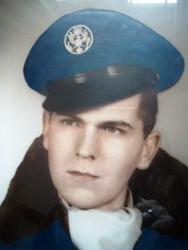 Terrapin Ridge area is where Ted grew up and attended the one room school house. He went one year to Greenville High School. After high school, he joined the United States Air Force achieving the rank of Staff Sergeant. While serving four years in the in the Air Force, he was a mechanic for jet fighters. He met his future wife while in the military in Bryan, Texas. After marrying his wife and being honorably discharged, they moved back to Illinois. They started their family and he went to work as an over the road truck driver, from which he retired in 1995.

His hobbies were varied and he loved doing such things as science, reading science magazines, tinkering with electronics, panning for gold, and diamond mining. His greatest hobby of all was spending time with his family, especially his grand and great grandchildren. He was a member of the American Legion for many years, the Teamsters Local 600, and he was affiliated with the Mt. Nebo Primitive Baptist Church.