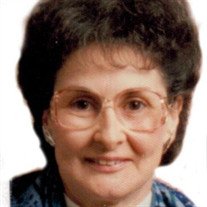 She was born October 07, 1933, in Pocahontas, IL, the daughter of Emmett and Edna (nee Zimmerman) Geries.

Mrs. Metzger was born in Pocahontas, IL. She attended and graduated from Pocahontas High School in 1951. Following her schooling, she worked for several years at Basler Electric in Highland. Following her marriage, she and her husband lived in Highland prior to moving to the family farm east of Highland where they lived from 1961-1976. In 1976 they returned to Highland. Mrs. Metzger enjoyed oil painting, making crafts, and working with flowers.

Memorial contributions may be made to Shriner’s Hospital for Children.