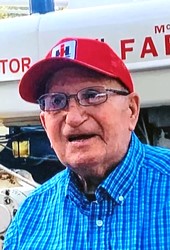 Chester LeRoy Tally, the son of Ivan and Nina (Westnitzer) Tally, was born September 28, 1932 in Marshall, Illinois. Chester grew up in Marshall and attended the local schools, graduating from Marshall High School in 1950. He was one of three children, preceded in death by his brother, George and sister, Bernadine Snyder.

Chester and Mary Lou Daugherty were united in marriage on November 30, 1951, at the ages of 19 and 17, in Paris, IL. They have enjoyed 69 years together. Chester was a truck driver from the age of 11 until his second retirement at age 70. He started out hauling milk and moved on to livestock and beyond. He worked for various trucking companies including Armor Meats, Complete Auto Transport, and then retiring the first time from General Cable in 1984. He then started his own trucking company and drove for himself until his second retirement in 2003. In retirement, he enjoyed spending time with his grandchildren, his coffee shop buddies, and collecting and restoring Farmall Tractors.