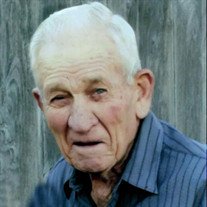 On April 18, 1956, he married Dolores Huelsmann at St. Francis of Assisi Catholic Church, Aviston, IL. She preceded him in death on November 23, 2020.

Cyril was born at home in St. Jacob, IL, and then moved with his family to Pierron, IL. He attended Immaculate Conception School in Pierron through the 9th grade. He grew up helping on the family farm and working for the neighbors milking cows and doing their farm work. He also worked at the Pierron Co-op Grain Elevator. After being drafted, he went off to the army at the age of 26 to serve in the Korean War. He was stationed in Alaska constructing air strips. Later he came back to Fort Leonard Wood, Missouri and did construction there. When he returned home, one of his first tasks was to build a barn on the family farm with his brothers. It was quite a large undertaking as they laid all the masonry and hand cut all the round wood trusses by hand. Cy talked of this project often and was very proud of their accomplishment. He also worked at Munie’s Gravel Pit. After getting married, Cyril and Dolores bought a farm north of Highland. Along with raising their 8 children, they farmed the ground, raised and sold hogs, put out a garden, raised many chickens for food and milked a cow by hand for fresh milk for the family. Cy worked at Warneke Sheet Metal and entered the Sheet Metal Union. After that, he spent some years at Armbruster Sheet Metal, then hauled milk for around 8 years with Frey Trucking, before retiring from Langhauser Sheet Metal at the age of 63. He continued to work for his sons’ construction company until age 80.

Cyril was a member of Immaculate Conception Catholic Church-Pierron, Holy Name Society of Immaculate Conception Catholic Church, Knights of Columbus Council 1580-Highland, Lee Iten Post 439-American Legion-Highland and the Sheet Metal Workers Local 268, Caseyville, IL. He worked countless nights at Bingo, on the floor and in the kitchen. As well as played music with the Knights Time Singers, providing entertainment to those in nursing homes and retirement communities. In his last years he was a caretaker for Dolores as she suffered from Dementia. He spent hours feeding her, playing music for her, or just sitting with her. He was such a man of faith and service, a wonderful example for his family as well as the many people he met through the years.

Cy truly appreciated so many things in life. In his younger years, baseball was one of his major pastimes. He was one of the star pitchers for the Pierron Stars and was quite the hitter as well. The sport was so important that he had a ball diamond in his front yard. Many family and friends gathered there for ball games, making lots of great memories, over the years. Additionally, he enjoyed throwing horseshoes and hunting, making several trips to Pheasant hunt in Iowa with his 4 boys in his later years. For several summers, he and a group of local men would travel from Pocahontas to Pinckneyville, by horse and wagon. They would take a couple days making their annual trip to the Wheat Threshing Festival. He also had a love for tractors. Giving up some of the physical things with age, he enjoyed praying the rosary, playing his harmonica, dancing and listening to music, and spending time with his wife and family. Cyril was a busy guy who rarely sat down for anything aside from eating, praying, going to church, and holding/snuggling the little ones. He will be greatly missed.

Private Visitation will be held on Saturday, January 23, 2021, at Spengel-Boulanger Funeral Home in Highland, IL.

Memorial contributions may be made to Immaculate Conception Catholic Church; Heartland Hospice or Hitz Memorial Home.