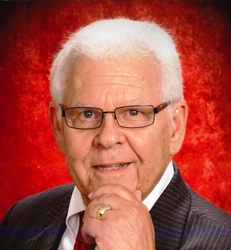 He was born October 19, 1940, in Highland, a son of the late Bernice, nee Brefeld, and Herbert Kurz.

In addition to his parents, he was preceded in death by his son Richard “Rick” Kurz; brother Jerry (Betty) Kurz; and brother-in-law Virgil Padfield.

He married Mary “Bougie” Zinschlag-Bassler July 1, 2013, in Belleville, IL and she survives in Trenton.

He retired as Special Agent of the Criminal Division within the IRS at the Washington D.C. branch after 25 years and later served on the Trenton city council from 1997-2001.

David was a member of St. Mary Catholic Church and was an honorary life member of the Trenton Knights of Columbus Council 2932. He enjoyed word puzzles and taking many walks.

A private Memorial Mass of Christian Burial will be held at St. Mary Catholic Church in Trenton with Fr. Joseph Rascher presiding. Interment will follow in St. Mary Cemetery, Trenton.

In lieu of flowers or gifts, memorials may be made to St. Mary Catholic Church or Unity Hospice and will be received through Moss Funeral Home, who is serving the family (535 North 5th Street, Breese, IL, 62230).