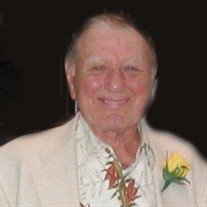 Don was born in Aviston, IL and graduated Aviston High School. He joined the US Army and served in Korea during the Korean War. When he came home he worked at Jakel Manufacturing, Neubauer Market and later became co-owner of Korte and Richter Meat Processors. He loved playing golf and traveling with his wife. He was also active with the Cub Scouts, and Khoury League Baseball and the Highland Optimist Club, selling Christmas trees and running the trash bag fundraiser for several years. Don was known for his big smiles and big hugs. The family asked friends to raise a Stag Beer in his memory.

Memorial Funeral Mass will be at Saint Paul Catholic Church in Highland, IL at a later date.

Memorial contributions may be made to Highland Optimist Club.