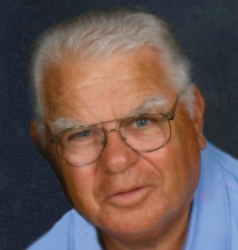 Mr. Perkes was born November 4, 1935, in Breese, a son of the late Raymond and Adeline, nee Schlueter, Perkes.

In addition to his parents, he was preceded in death by his brothers, Laverne (Annette) Perkes, Raymond “Jupe” Perkes, and William “Bill” Perkes; his sister Adrienne (Tom) Wobbe; father-in-law and mother-in-law, Elmer (Clara) Schulte; and brother-in-law Mack McCoy.

Duck was a veteran of the United States Army, and later retired from General Motors Parts Department after 35 years. He was a member of St. Dominic Catholic Church in Breese, American Legion Post 252, and Breese Knight of Columbus Council 2869. He was an avid sports fan and enjoyed watching the St. Louis Cardinals but about all he loved attending Mater Dei basketball games.

He and his wife were especially known for hosting their neighborhood driveway gatherings.

A Memorial Mass of Christian Burial will be held Wednesday, January 27, 2021 at 10:00 a.m. at St. Dominic Catholic Church in Breese with Fr. Patrick Peter presiding. Interment will follow in St. Dominic-St. Augustine Cemetery, Breese. (COVID-19 restrictions will be followed, masks required, social distancing, please keep your visit brief and mass will be limited to 100 people)

In lieu of plants, flowers, or gifts, memorials may be made to Mater Dei Catholic High School and will be received at the church or through Moss Funeral Home (535 N. 5th St., Breese, IL, 62230) who is serving the family.