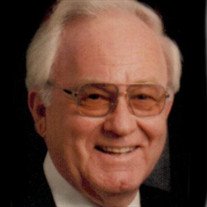 Mr. Metzger was born in Bond County, IL, just east of the Madison County line. He grew up on the family farm and attended Hesse Country School. He graduated from Highland High School in 1943. Following his schooling, he worked on the family farm and on heavy construction sites for Laborer’s Local #680 in Highland. He later became a licensed Realtor. After selling real estate for a number of years, he was employed by the Illinois Department of Transportation for 19 years. He retired from Illinois Department of Transportation and worked for First Student Bus Service for 17 years. Following his marriage, he and his wife lived in Highland prior to moving to the family farm east of Highland where they lived from 1961-1976. They returned to Highland in 1976.

Memorial contributions may be made to Shriner’s Hospital for Children.