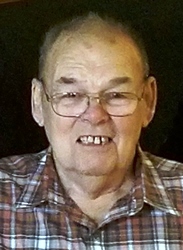 Mr. Schulte was born in Breese, Illinois on August 25, 1938, a son of Arnold H. and Virginia (nee Gehrs) Schulte. He married Betty Wellen on June 18, 1971, and she survives in Beckemeyer.

He was preceded in death by his parents – Arnold and Virginia Schulte, and his siblings – Kathleen Schulte, Michael Schulte, Eileen Henkel, Phyllis Ritchey, and Philip Schulte.

Mr. Schulte was the owner and operator of Schulte’s Garage in Beckemeyer for 62 years. He loved building stock cars and pulling tractors, and he also enjoyed boating and spending time on the lake. Hubert was a former volunteer on the Beckemeyer Fire Department.

The Schulte family will greet friends and family at St. Teresa’s Catholic Church – Marydale from 9:00 – 11:00 AM on Monday, January 11. Space in church will be limited, and everyone will be required to wear a mask, observe distance, and refrain from close contact. A private memorial service will be held, with burial at St. Anthony’s Cemetery in Beckemeyer.

Expressions of sympathy in memory of Mr. Schulte are suggested to the American Heart Association. Donations can be mailed to the family at Zieren Funeral Home, PO Box 276, Carlyle, IL 62231.