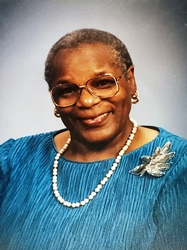 She was educated in the Kinloch school system in St. Louis, Missouri and later became licensed as a Beautician among many other trades. She joined in holy matrimony to the late Lewis Williams Jr. of Mulberry Grove IL and together they relocated to Royal Lake (Carlyle) IL in September of 1997.

She was a member of Holy Garden of Prayer Church in Carlyle IL where she served on the mother’s board and assisted as needed in multiple other ministries. She enjoyed arts and crafts and would often spend time building wooden doll houses, Christmas trees made of tool fabric, or decorating greeting cards. She was a loving grandmother to all and wouldn’t hesitate to tell you her opinion leaving a lasting impression on those blessed to have known her.

Online condolences may be made to the Robert family by visiting www.nordikefuneralhome.com.