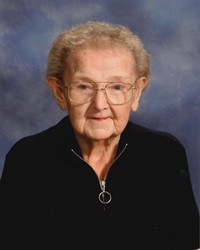 Wilma was born May 16, 1925 in Sorento, the daughter of Frank Robert and Alice Marie (Blackorby) Allen. She married Stanley H. Voyles on June 15, 1946 in Donnellson. He preceded her in death on June 20, 1979. Wilma retired from Roller Derby in Litchfield after 24 years and service, and spent her retirement years also working as a caregiver for many people. She married Harold O. Simburger on November 7, 2015 at Holy Angels Catholic Church in Wood River, and he survives her, of Bethalto.

Visitation: The family will receive guests from 11:00-1:00 p.m. on Tuesday, January 19, 2021 at Perfetti-Assalley Funeral Home, 201 S. Main Street, Sorento, IL 62086. Social distancing will be required, as well as the wearing of masks. A private family funeral ceremony will be held at the funeral home with Rev. Alan M. Hunter officiating.

Interment will follow the ceremony at Sunnyside Cemetery in Sorento.

In lieu of flowers, memorial contributions may be made to: Sunnyside Cemetery Association, 105 E. Taylor Street, Sorento, IL 62086.

Please visit www.assalleyfuneralhomes.com to offer condolences to the family.