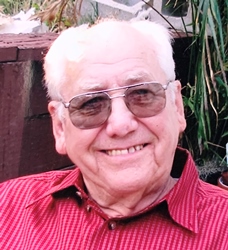 Edgar H. Netemeyer, 93, of Albers died on January 30 at Oak Hill Nursing Home in Waterloo. He was born April 1, 1927 in Albers, son of William and Agnes (Dierkes) Netemeyer. He married Marie Brandmeyer on September 6, 1950 in Albers, and she proceeded him in death on February 19, 2017.

Upon graduating from Aviston High School in 1945, he served in the United States Marine Corps until 1948. After serving in the Marine Corps, Edgar and his brother Lou ran the WM. Netemeyer Elevator. He retired from Gateway FS in 1993. In 2015, health issues resulted in Edgar and Marie moving to assisted living in Waterloo to be closer to some of their children. Up until then, Edgar was a lifelong resident of Albers who was proud to call Albers his home. He was an active member of St. Bernard’s Parish and Holy Name, and American Legion Post 1026. Mr. Netemeyer was a charter member of the Albers Commercial Club, Albers Fire Department, and the St. Bernard’s Men’s Choir in 1963. He also served on the town board as Village Treasures for 45 years from 1954-1999.

A private graveside service will be held 10:00 a.m on Thursday, February 4, 2021 at St. Bernard Parish Cemetery in Albers with Deacon Glenn Netemeyer officiating. A celebration of life mass will be held at a later date at St. Bernard’s Catholic Church.

Memorials may be made to St. Bernard Parish Cemetery Fund or Clinton County Relay for Life and will be received at Nordike Funeral home. Condolences may be sent to the family at www.NordikeFuneralHome.com.