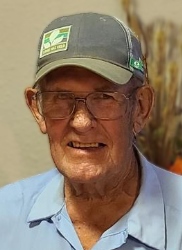 Tom is survived by 2 sons – Ryan Hughes and wife Margaret, and Josh Hughes and wife Nicole, all of Carlyle; 3 grandchildren – Adelaide Helen Hughes, Jacob Thomas Hughes, and Charli Mae Hughes; a sister – Mary Ellen Hughes; a brother – William E. Hughes and wife Becky; his in-laws – Charles and Norma Voss, Joseph and Joan Voss, Ralph and Karen Voss, and Geri and Dan Wobbe; his goddaughter – Stacie Hughes-Smith and husband Travis, and their children, Hendrix and Jaxsun; and many nieces and nephews.

Tom graduated from St. Mary’s Grade School and Mater Dei High School. Following school, he was stationed in Germany while serving in the United States Army. Tom worked for Granite City Steel, he was a mechanic for Jansen Farm Equipment, and was a farmer. He served more than 40 years for the Huey-Ferrin-Boulder Fire Department, retiring as assistant chief in 2014. Tom was a member of the Beckemeyer American Legion Post 1227, Carlyle Knights of Columbus, Council 1382, and the Clinton County Farm Bureau. He had many interests, including fishing, bowling, and collecting antique tractors. More than all, Tom loved spending time with his grandchildren and family.

A Mass of Christian Burial will be celebrated at 10:00 A.M. on Wednesday, March 3, 2021, at St. Mary’s Church in Carlyle, with Fr. George Mauck, celebrant. Interment will follow at St. Mary’s Cemetery, with military honors provided by the Beckemeyer American Legion. Visitation will be held at Zieren Funeral Home on Tuesday, March 2, 2021, from 4:00 – 8:00 PM and on Wednesday morning from 8:00 – 9:30 AM.

Memorial donations are suggested to the Huey Ferrin Boulder Fire Department and will be received through Zieren Funeral Home, PO Box 276, Carlyle, IL 62231. Online condolences may be sent to www.zierenfuneralhome.com.