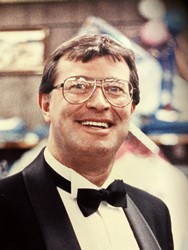 Wayne R. “Dick” Braye age 77 formerly of Greenville passed away in his home in Venice Florida on February 13 2021. A grave site service will be held on Tuesday March the 2nd at 11am at the Mount Auburn Cemetery. The public is welcome at this service. In lieu of flowers, plants, and other gifts the family requests that donations are made to the American Cancer Society or to the American Diabetes Association.

Dick was born in Nokomis Illinois to Wayne and Hattye Braye on July 11, 1943. Dick married Sherri Rench on November 18th, 1962 and had three children. Bradley, Bryan, and Dena.

Dick’s second marriage occurred on April 12 th 1986 to Anna Braye. At the time of his death Dick and Anna were married 35 years. Dick is survived by his wife Anna of Venice Florida, and his children Bradley of Greenville, Bryan (Jennifer) both of Greenville, and Dena (Phil) who reside in Edwardsville, IL. Dick was been blessed with multiple grandchildren and great grandchildren.

Most people will remember Dick as the Co-owner of Genre’s Clothing. Dick clothed the men and boys of Bond County for more than 28 years. Dick never knew a stranger and many times went out of his way to talk to those who were less fortunate. After Genre’s closed in 1990 Dick followed his wife to Sarasota Florida, and both worked for Goodwill Industries for five years.

Dick received an unexpected job offer from DeMoulin Bros. of Greenville in 1995. Dick stayed with DeMoulin’s as the Customer Service Manager until 2003. Once again his wife’s job took her away from Greenville to Lubbock Texas and Dick retired from Demoulin’s to follow his wife to Texas. They both returned to Venice Florida as they both retired in 2013.

Dick belonged to the Greenville County Club and golf was a passion of his for many years. Dick can be best remembered as the guy you could depend on, the man who never knew a stranger and was always present with a smile. Dick loved his family very much and told them such often.

He is loved, missed and will remain in our hearts forever.

He is preceded in death by both parents and an older brother, Wayne Edward.