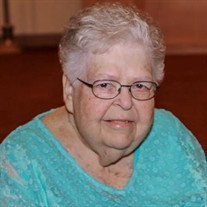 She was born on Wednesday, February 26, 1936, in Saint Jacob, IL, the daughter of William and Sarah (nee Seitz) Porter.

She was a member of United Church of Christ of Marine, Marine, IL; the UCC of Marine Quilters and Women’s Guild; HCE Home/Community/Education (formerly Madison County Extension & Home Education).

Mrs. Blumberg was born and raised on the family farm outside of St. Jacob, IL. She graduated from St. Jacob High School in 1954. She worked at various jobs until marriage, when she moved to Marine, IL. She was a homemaker and the bookkeeper for the family business. She was very active in her church, the Women’s Guild, arranging funeral luncheons and quilting. She enjoyed her grandchildren, helping with 4-H and being a judge at the Madison County Fair.

A Memorial Service will be scheduled at a later date.

Memorial contributions may be made to the United Church of Christ of Marine or American Diabetes Assoc..