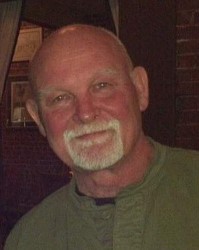 A celebration of life will be held 1:00 – 3:00 pm. Saturday, March 20, 2021 at the Donnell – Wiegand Funeral Home in Greenville. Masks are asked to be worn and social distancing as best possible. Memorials to Bond County Hospice, Second Chance Animal Rescue (of Fayette County), or Brown Cemetery. Memorials may be mailed to the Funeral Home at 203 W. Oak St., Greenville IL, 62246.

Douglas David Derrick was born in Highland, IL on October 26 1954. Doug’s parents were David Daniel Derrick and Margaret Ann Wade, who raised Doug, and his sister, Denise, in East St. Louis and O’Fallon. Doug graduated from O’Fallon Township High School in 1972. He moved to Greenville and started working for his uncle, Lyman Wade, at Wade Ford until becoming co-owner of Greenville Ford, making many new friends along the way. Later, that business progressed into Taylor Derrick Ford, where friendships continued and even more close friendships were made. The final path of the car business was with D&R Motors. Along the journey of work and life, he met Terry Brown, and they created three beautiful daughters, Lesley, Jamie, and Kelly.

Throughout his life he had many interests – he had been active in the Optimist Club, the NRA, the Central Township Committee, and loved the St. Louis Blues. He also loved to sing karaoke, his dogs, the Jellyfish Bar for crab claws, a good Bailey’s and coffee, car rides and having fun. Doug had a great sense of humor, was a Jeopardy pro and always put the needs of others ahead of his own. He finished his life exactly the way he wanted, cared for and loved by his wife and 3 daughters.

Also surviving are many cherished aunts, uncles and cousins. Many of his daughters’ friends became like his own children and he guided them over the years, providing care and compassion, advice and support, and was proud of them as he was of his own children.

Online condolences can be made at donnellwiegand.com.