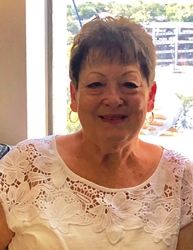 In addition to her husband she was preceded in death by her daughter LeAnn Albert; her sister Ruthann Adams and her brother Billy Adams.

Her favorite entertainment was winning big on the slot machines. Jeanne retired from the Clinton County Treasurer’s Office and was a member of the Eastern Stars.

Visitation will be held for the public from 4:00 until 7:00 PM on Thursday, April 1, 2021 at Nordike Funeral Home in Carlyle. A private graveside service will take place at a later date.

Memorials made in memory of Jeanne are suggested to the Mater Dei Volleyball program or Christmas in Carlyle and will be received at Nordike Funeral Home, 740 Fairfax Street, Carlyle, IL 62231.

Online condolences may be made to the Kleber family by visiting www.nordikefuneralhome.com.