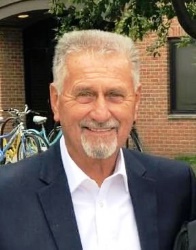 Lynn R. Carlson, 78, went to be with the Lord on Wednesday, March 24th, in his home in Greenville, Illinois with his wife of 55 years, Helen, at his side.

A visitation is scheduled in the sanctuary of the Greenville Free Methodist Church on Easter Sunday, April 4th at 2 pm. A memorial ceremony will follow at 3 pm in the same location.

On June 19th of 1965 Lynn married Helen Frances Smith of Toronto, Canada in Dearborn Heights, Michigan. They moved together to Elgin, Illinois in the fall of 1965 with teaching positions in the public school. After two years of teaching Lynn and Helen traveled to Taiwan where they taught for 2 years at Morrison Academy in Taichung. Returning stateside in the fall of 1969 Lynn continued his teaching career in Zion, Illinois where he retired 30 years later. While teaching in Zion Lynn obtained his Master’s in Counseling from the University of Wisconsin-Whitewater serving as a school counselor for 2 years. Upon obtaining his Master’s in Administration at Northern Illinois University he transitioned to an Assistant Principal position within the same school district. After obtaining yet a third master’s degree in School Finance from NIU Lynn spent 20 years serving as the Business Manager and Assistant Superintendent for Zion Elementary School District.

Lynn and Helen were active in Wesley Free Methodist Church in Waukegan, Illinois for many years where they still have many friends. Lynn also served on the School Board for 2 terms for Westosha Central High School where he lived and raised his family in Wisconsin.

Lynn was an avid sports person, no matter the competition. At Fargo Central he captained the ice hockey team as a senior and also competed on the golf team. He played basketball and baseball at Wessington Springs and Greenville College. Throughout his life Lynn loved competing and he quickly developed a keen skill and strategic understanding in any activity he picked up. In 1996 he was inducted into the Greenville College Athletic Hall of Fame. Upon his retirement in 2001, Lynn and Helen moved to Greenville, Illinois and joined the Greenville Free Methodist Church renewing and deepening many relationships from their college days. Lynn and Helen traveled widely upon their retirement years. They lived in Greenville from April through October every year. But, from November through March Lynn and Helen lived in Casa Grande, Arizona in Palm Creek RV Resort and Residences where they made many good friends through the years. In his retirement Lynn was an avid golfer until 2004 when he first picked up a pickleball paddle in Arizona. He soon began entering tournaments across the US where he won countless gold medals in his age bracket. Lynn had a passion for teaching the game of Pickleball and served in that role in his park in Palm Creek. In recent years he started the Greenville Pickleball Club where he played, taught, and administered the game for many local experienced and novice Pickleball players alike.

Lynn was preceded in death by his parents, brother, Arlin, and sister, Eileen Carlson.