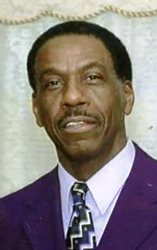 Richard Melvin Bryant, Sr., age 72 of Royal Lake, passed away at his home Saturday, March 6, 2021 surrounded by his family.

Richard, the son of Melvin Bryant and Mattie Bradford, was born February 17, 1949 in Centralia, Illinois. He grew up in Centralia and attended Centralia city schools. Richard married Paula White on September 5, 1970. They enjoyed 38 years together until her passing on October 2, 2008. He married Shirley Jones on November 29, 2015. She has loving cared for him until his passing.

Richard worked at Valley Steel in Centralia for many years then at Nevco Scoreboard in Greenville. His passion in life was ministering to anyone who would listen. He loved to hold revivals and traveled to local churches and several states preaching the Word. He also had a calling to visit local prisons and minister to the inmates. His famous line was “I’m blessed by the best.” Anyone who knew Richard would recognize him by always having a big smile on his face. His nickname growing up was Smiley.

Condolences to the family may be made online www.donnellwiegand.com. Memorials may be made at the church or mailed to Donnell – Wiegand Funeral Home, 203 W. Oak, Greenville, IL 62246.