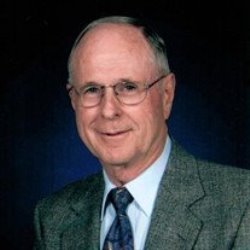 He was born on February 21, 1936, in Tamalco Township, Bond County, IL, the son of Albert and Grace (nee Dickson) Barth.

On November 20, 1959, he married Joyce A. Zimmerman at the Christian Church in Tamalco, IL.

Albert was born in Tamalco Township in Bond County. He grew up on the family farm and graduated Greenville High School in 1953. After graduation, he farmed with his dad and joined the US Army Reserves in May 1957. He started at McDonnell Douglas in 1959 and retired in September 1996, serving 37 years. Albert enjoyed many years of vacationing at his summer home near Silver Cliff, Wisconsin. He enjoyed refinishing oak furniture, fishing, cracking walnuts and pecans, Cardinal Baseball and followed the St. Louis Blues.

Memorial Funeral Service will be at 11:00 AM on Tuesday, April 27, 2021, at Evangelical United Church of Christ in Highland, IL, with Rev. Todd Bean, officiating.

Memorial contributions may be made to Highland Optimist Scholarship Fund; Evangelical “Love” Fund; or Payne Cemetery.