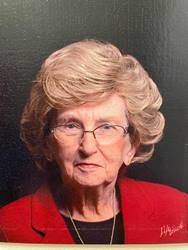 Barbara Corning, age 87, passed away Monday, April 19, 2021 at Greenville Nursing and Rehabilitation Center. A private memorial service will be held at a later date. In lieu of flowers, plants and other gifts, memorial contributions are suggested to the First United Methodist Church of Greenville.

Barb grew up in Pardeeville, WI and graduated from Pardeeville High School. She married Gordon and moved to El Paso, TX where Gordon was in the military and she worked as a secretary. They later moved back to Pardeeville, bought a house and started to raise their family.

In 1972 they moved to Greenville where Barb took a job at Southwestern Electric. After six years, they moved to Glen Ellyn, IL where she worked as a secretary for several years before returning to Greenville permanently. She took a job at the Greenville Advocate and worked there until she was 80. She was a member of the First United Methodist Church. Barb loved antiquing and refinishing furniture, and spending time with her grandchildren. She will always be remembered for her exquisite cooking skills and tender care for her beloved dogs.

Barb was preceded in death by her parents and daughter, Ellen Jeanne Childerson.