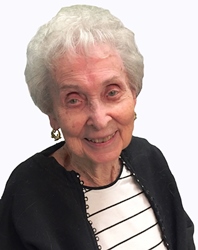 Elinor led the Wesclin marching band in high school. After graduation she worked in St. Louis until getting married in 1944, a marriage that would last over 70 years. She traveled to California with her naval aviator husband, and when he shipped out, she returned to Trenton to raise her family. She was very adventurous for a small town girl and enjoyed traveling and seeing the world. Elinor was always ready for a good game of anything, be it golf, tennis or cards. She was a member of St. Mary Church and Altar Sodality, the Trenton Women’s Club and many card clubs. Mostly she enjoyed spending time with her family and many friends.

Friends may call from 9a.m. until time of service at 11a.m. at St. Mary Church in Trenton.

Memorials may be made to St. Mary Church or HSHS Hospice of Southern Illinois. Condolences may be sent to the family at www.nordikefuneralhome.com.