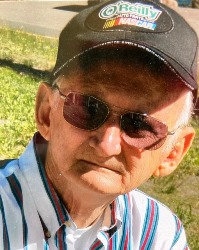 A celebration of life for 84 year old Harry Lee Smith, of Greenville, will be Saturday, June 12 from 2 – 4 PM in the Bradford National Bank Community Room.

Harry Lee Smith, 84, of Greenville, IL passed away peacefully at home on Sunday, December13, 2020. A celebration of life will be held at a later date. Memorials may be made to Bond County Humane Society or Meals on Wheels.

Harry was born July 17, 1936, “in a chicken coop, per Harry,” in Greenville, IL. His parents were Wayne and Frances (nee Hubbard) Smith. He married Emma Jean Massey, of Sorento, in 1956. They divorced in 1980 and she passed away in 2001. Harry and Emmy had three children: Kathi (Dan) Barnett of Pottsboro, TX; Pam (Tim) Neary of McKinney, TX; Andy (Dorie Fornero) Smith of Mercer, WI; as well as 2 grandchildren, Drew Michael Smith and Zachary Morton.

He is also survived by his sister Mary Serbantes of Los Angeles, CA.

He is preceded in death by his parents; sister, Betty and husband, Don Newlin; and brother-in-law, Gene Serbantes.

Harry was a member of Greenville Jaycee’s for many years and received multiple awards, including the Rooster Award. He owned several restaurants and pizza shops over the years – The Snack Shack, Elm’s Café, 0292 Pizza House, and the A&W Root Beer Stand, which later became Harry’s Drive In. He drove a bus for 32 years and painted numerous homes and businesses in the area. Harry loved vintage cars, especially his 1965 red Mustang. He enjoyed fishing and deer hunting with family, as well as, playing checkers with his grandchildren. As he got older, he loved watching old westerns.

Harry never met a stranger and had many friends. He always had a great story or joke to share. He was one of a kind and will be greatly missed.