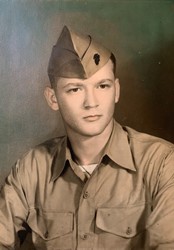 Larry was born September 28, 1942 in East St. Louis, the son of Walter And Bernadine (Johnson) Wallace. He married Ruby Miller on October 6, 1979 in Sorento.

Larry graduated from East St. Louis High School in 1961, and went on to proudly serve our country in the United States Marine Corps. Larry served during the Cuban Missile Crisis, and later Vietnam. Upon his honorable discharge, he went to work for the Boilermakers #366 in Belleville for over 30 years. While there, Larry worked part-time as a Sorento Policeman. He concluded his career working for CIPS as a high-pressure pipe and tube welder. Larry was a member of the Panama V.F.W., a past member of the Sorento American Legion, a past volunteer firefighter for Shoal Creek, a past board member for the Village of Sorento, and a member of the Masonic Lodge in Belleville. He could fix anything, and he quickly became the town welder and handyman in Sorento. Larry loved hunting, fishing, mechanic work, and most of all welding. He and Ruby were incredible jitterbug dancers. They were the type of dancers that other dancers would clear the floor for.

He was preceded in death by his parents; and brother, Terry “Ray” Wallace.

Please visit www.assalleyfuneralhomes.com to share memories of Larry, or offer condolences to his family.