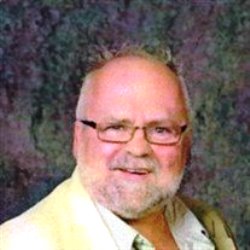 He was a member of Evangelical United Church of Christ. He was also a member of Highland Arts Council ; Highland JC’s (Past President) ; Madison County Election Judge.

Lynn was born in Valley City, ND. His father was a career Air Force Officer and moved to the Metro East when transferred to Scott Air Force Base. Lynn graduated Highland High School in 1979. He had worked at Jeff’s Reabans Drive Inn, Alpine Bank in Highland, Centerre Bank MerchantileTrust in St. Louis. He was head waiter at Tony’s in Maryville and managed restaurants (Little Caesar’s and Pizza Hut). Worked at Cash America Pawn Shop in St. Louis. Lynn loved oil and acrylic painting since the age of 10 and doing crafts and macramé. Lynn taught a Wednesday and Sunday Bible Class at Evangelical United Church of Christ. At Easter, Lynn and the Wednesday Morning Bible Study group sponsored the circle drive “Take a Flower” mission project, with 100% of the proceeds directed to local charities. Lynn loved his pet Boxer “Twix”.

Funeral Service will be at 11:00 AM on Monday, April 05, 2021, at Evangelical United Church of Christ in Highland, IL, with Rev. Todd Bean officiating.

Interment will be held at a later date at Faith Lutheran Church Cemetery in Valley City, ND.