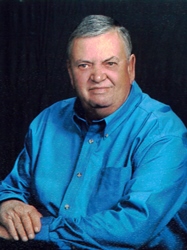 Mr. Goldsmith was born September 29th, 1945 in Centralia, Illinois, a son of John Clifford and Martha (Adams) Goldsmith. He married Georgia Fulford on August 26th, 1965, and she preceded him in death on January 31st, 2017. Shelby was a member of the Columbus Baptist Church and worked as a heavy machine operator for Operating Engineers Local 520. He served as a volunteer fireman for the Carlyle Fire Department for many years. Mr. Goldsmith enjoyed fishing, hunting, and going to deer camp with his friends.

Shelby’s survivors include his two children, Shelby W. Goldsmith, and Kim Deiters and husband Kory; his grandchildren, Alyssa Deiters and fiancé Collin Holthaus, and Emily Deiters; his in- laws, David and Anita Fulford, Judy Eilers, and Darlene Leitsch; and many nieces and nephews.

He was preceded in death by his wife, Georgia Goldsmith; his parents, John Clifford and Martha Goldsmith; his siblings, Sharon Keene and husband Bob and John Goldsmith and wife Norma; his in-laws, Paul and Charlene Leitsch, Wally Eilers, Mary Ann and Cliff Mollet, Sue and Gene Farmer, Bob and Mary Catherine Berger, and Tommy Leitsch.

Expressions of sympathy in memory of Mr. Goldsmith may be made to Shriners Hospitals for Children, or to his family’s wishes. Memorials will be received through Zieren Funeral Home, PO Box 276, Carlyle, IL, 62231.

Online Condolences may be shared with the family at www.zierenfuneralhome.com