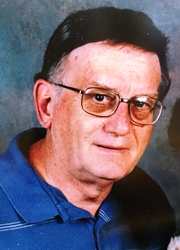 After high school, Stan joined the Army, serving from 1965 to 1967, during the Vietnam War. He came home and went to work for Artex International, staying there until his retirement.

He played softball in various VFW Over 40 leagues for many years, becoming Champions in 1993. He then coached when he could no longer play, and even took up golfing. An avid fan of the St. Louis Cardinals and San Francisco Giants, he enjoyed baseball. Stan and Sharon enjoyed camping and traveling to Las Vegas almost annually. One of his true enjoyments was walking his dog Willie and taking him for rides in his truck. Stan was a great Dad, a loving husband to Sharon; and a friend to many.

Memorials may be made to Highland Food Pantry.