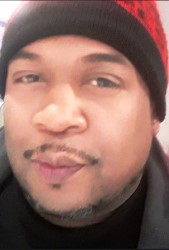 Terraine Betts 48, of Greenville, passed away on Easter Sunday April 4, in Greenville.

Services for Terraine Betts will be family only on Friday, April 16, at 12:30 p.m., at the Bibleway House of Prayer in Mulberry Grove, Illinois. There will be public visitation from 9 a.m. until 11 a.m. at the church. Please wear a face covering and plan to social distance if you attend. Memorials for funeral expenses may be made to the Donnell – Wiegand Funeral Home, 203 W. Oak Street, Greenville, IL 62246.

Terraine was born May 6, 1972, in Milwaukee, Wisconsin, to Rosalyn Betts and Ernest White, Jr. Terraine attended school in Greenville and received his G.E.D. from Bond County R.O.E. He was a naturally talented and bright person with his true work passion was telemarketing. He worked for Pisa Group for more than a decade. Terraine married Cathy Williams on August 9, 2009, but later divorced. Raine was the father of Courtney Betts, Terraine Betts, Jr., and Derek Fisher. He was also the grandfather of Jonathan, Jermaine, Shalay, and Jordan.