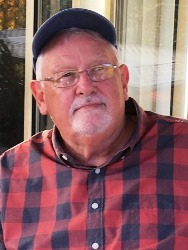 Terry L. Donaldson, age 79, of Greenville, IL passed away, Tuesday, April 27, 2021 at St. John’s Hospital in Springfield, IL. Funeral services will be conducted Monday, May 3, 2021 at 1 PM at The Greenville First Christian Church. Interment will be in Mt. Auburn Cemetery.

Friends may call Monday after 11 AM at the church. Please practice social distancing wear a mask while in the church. Memorial contributions are suggested to The Greenville First Christian Church or Shiner’s Hospital for Children.

Terry was born February 10, 1942 in Peoria, IL to Frederick Eugene and Lola Frances (Lewey) Donaldson. He married Sandra S. Downs on January 9, 1960 in Pamona, CA. She died September 6, 1996. He then married Susan Brown on March 12, 1997 in Gatlinburg, TN. He is survived by his wife Susan of Greenville, IL: his sons; Randy (Carol) Donaldson of Highland, IL, Danny (Joanne) Donaldson of Powell, OH, and Tony (Angie) Donaldson of Gulfport, MS, Kerry (Tonya) Hargan of Russellville, AR; his sister Jo (Max) Sussenbach of Greenville, IL; his brother Rod Donaldson of Harverster, MO; his grandchildren Tyler, Trent, Tayler, Katey, and Dana; his great grandchildren Drake, Jaxon, Maddox, and Bodhi. He was preceded in death by his parents, his first wife Sandra, and a brother Michael Dean Donaldson in infancy.

He grew up in the Sorento area and graduated from Greenville High School. He went to work as a lineman for Southwestern Electric and retired as General Manager of the Coop. He loved golf and Cardinal Baseball as well as trips to The Smoky Mountains. He was a member of the Greenville Country Club and The Greenville First Christian Church. He was Mason and also a Shriner.

On-line condolences can be made at www.youngfh.net.