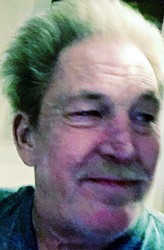 A gathering of family and close friends will be held at the Donnell – Wiegand Funeral Home Saturday, May 1, 2021 from 3:00 p.m. – 4:00 p.m. Memorials may be made to the Lemuel Rhodes Foundation.

Tom, the son of Marion Edwin and Delores Jean (Edwards) Keyes, was born August 14, 1961 in Elyria, Ohio. The family moved to Greenville when Tom was 9 years old. He attended Greenville schools and Greenville High School with the Class of 1979. Tom helped his dad at the Texaco Station in Greenville growing up.

Tom served our country in the United States Army. He was honorably discharged on December 4, 1980 as Private First Class.

Tom was a mechanic and enjoyed cars. He worked at Mick’s Autobody for many years. Tom loved Rockn-Roll music and listened to KSHE 95 because it was the only station that played REAL Rock-n-Roll music.

He had a nice collection of vinyl albums also.

He is survived by his sister Tammy Keyes of Christopher, Illinois. Preceded in death by his parents and only son Michael Keyes on December 4, 2011.