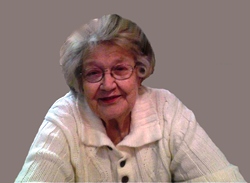 Viola Eleanor Jansen, 94, of New Baden, died Saturday, April 10, 2021 at Clinton Manor Living Center in New Baden. She was born March 31, 1927 in New Memphis, the daughter of Frank and Myrtle “Mirty”, nee Hill, Walthes. She married Clemens Joseph Jansen, Sr. on November 27, 1947 at St. George Catholic Church in New Baden and he preceded her in death on November 3, 1980.

Mrs. Jansen was a homemaker; a member of St. George Parish in New Baden; and former owner of Jansen’s Family Restaurant and Lounge in New Baden. She was born and raised on a farm in New Memphis, Clinton County, IL. After marriage, her and Clemens moved to New Baden, Illinois. Viola and her husband would buy rental property and fix them up. She enjoyed playing cards, bingo, scratch off tickets and making afgans. She loved her children, grandchildren and great grandchildren. She loved to cook, can and bake, sew, garden and was amazing at all of them.

Funeral Mass of Christian Burial will be held at 10 a.m. on Thursday, April 15, 2021 at St. George Catholic Church in New Baden.

Memorials may be made to Clinton Manor or Hospice of Southern Illinois and will be received at the funeral home.