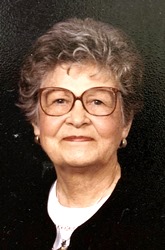 Betty Raeber Schmitt, age 97 of Highland, Illinois, passed away at San Gabriel Memory Care early Tuesday morning, June 1, 2021. The family will be having a private service with interment in Highland City Cemetery. Memorials to Heartland Hospice may be sent to the Donnell – Wiegand Funeral Home, 203 West Oak Street, Greenville, Illinois 62246.

Betty Raeber Schmitt was born on the Raeber Farm north of Highland, IL on August 1, 1923 to Minnie Meyer Raeber and Othmar N. Raeber. She grew up on the family farm and graduated from Highland High School in 1941. On August 7, 1943 in Odessa, TX she married PFC B.J. (Nobby) Schmitt.

Betty was a General Motors bookkeeper for 39 years. She started for her father-in-law at Schmitt Chevrolet in Troy, Illinois in 1954. In 1959, William S. Schmitt sold the dealership to his son, Nobby Schmitt, husband of Betty. She continued there until General Motors closed the dealership in 1961. She and Nobby bought the dealership in Greenville, Illinois in 1961 and opened Nobby Schmitt Motor Company where they sold Chevrolet, Buick, and Oldsmobile. She was the head bookkeeper and office manager. In 1980 the business was sold to their son, Steve Schmitt and she continued to work for him. In 1985, Steve purchased Genteman Chevrolet and Oldsmobile in Highland, Illinois where she worked until her retirement in 1993.

Online condolences may be made by visiting www.donnellwiegand.com.