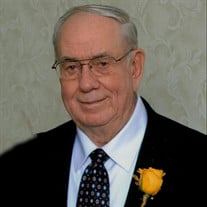 He was born on a farm east of Pierron, IL near Pocahontas,IL. He attended Immaculate Conception Grade School. His father passed away when Clarence was 13 years old; his mother continued to operate the family farm. He and his brother helped operate the farm. He served in the US Army from 2/18/1954 to 11/17/1955 during the Korean War. He did construction work for several years, then he purchased and operated the family farm. He was featured in the National Geographic for his organic farming in February 1980. In the mid 1980’s they moved off the farm and he followed a career as a union carpenter and later retired. His avocation was woodworking; he built wooden horses for all his grandchildren. He loved his family and was a faithful church member. He was a father figure for nieces and nephews and quick to help anyone.

Funeral Mass will be at 10:30 AM on Thursday, June 03, 2021, at Immaculate Conception Catholic Church in Pierron, IL, with Father Paul J. Bonk, Pastor, officiating.

Memorial contributions may be made to St. Gertrude Catholic Church.