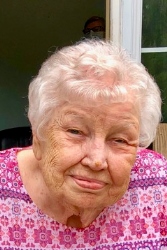 She was preceded in death her husband Clarence File, her son Charles Arthur File who died at eight months, her step grandson Rodney Leidner, her brothers Lester Schildknecht, Clarence Schildknecht, Leo Schildknecht and Earl Schildknecht along with her sisters Lucille Boedeker and Irene Lanter.

Ethel grew up in the O’Fallon/Lebanon, IL area and attended Oakhill School. After her marriage to Clarence File they lived in Sarasota, FL of several years before moving back to Greenville in 1994. In 2007 they sold their home on Ladue Place in Greenville and moved to The Glenwood where she remained until moving to Greenville Nursing and Rehab this past fall.

Ethel was a loving and dedicated mother, always providing constant encouragement and support to her family. She had a special passion to sing songs around the house, particularly her favorite hymns. She enjoyed playing cards, especially rummy and was amazingly lucky at bingo. Ethel will be remembers as one with a quiet demeaner, a loving grandmother and having a kind heart.

On line condolences can be made at www.youngfh.net