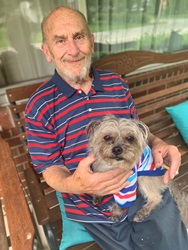 He was born March 4, 1937 in Germantown, a son of the late Frank and Clementine, nee Jansen, Schlautmann.

In addition to his parents, he was preceded in death by his wife Penny, nee, Almasy, Schlautman, whom he married November 25, 1961 at St. Dominic Catholic Church in Breese and who died September 15, 2015; a daughter, Mary Schlautman; grandson, Travis Beckmann; brother, David “Slick” Schlautmann; and brothersin-law, Henry Schroeder, Dave Otten, and James Almasy.

Jim was a veteran of the United States Marine Corps, formerly worked at McDonnell Douglas, and later retired from Boeing. He was a member of St. Boniface Catholic Church in Germantown, Germantown American Legion Post 325, and was on the committee that started the Germantown Spassfest. He enjoyed hunting, gardening, fishing, and was the unofficial keeper of Old Carlyle Road in Germantown.

In lieu of flowers, plants, or other gifts, memorials may be made to the Jared Burke Foundation and will be received at the church or through Moss Funeral Home who is serving the family.