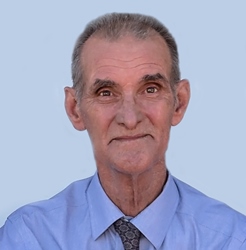 He was born March 15, 1946 in Trenton, a son of the late Stephen and Dorothy, nee Laux, Haselhorst.

In addition to his parents, he was preceded in death by his wife, Barbara, nee Schaeffer, Haselhorst, whom he married on July 6, 1968 at St. Mary Catholic Church in Carlyle and who died on February 2, 2017; his brother Tim Haselhorst; and father-in-law and mother-in-law, Raymond and Dorothy, nee Schiermann, Schaeffer.

Dan was a veteran of the United States Air Force. He began his construction career by starting his own company, Haselhorst Construction, and later worked for Killian Construction and then retiring from Baxmeyer Construction in Waterloo. He was a member of St. Mary Catholic Church in Trenton and Men’s Sodality where he served as a Eucharistic Minister, Confirmation class teacher, usher, and was part of the pastoral council. Dan was a member of the Trenton Knights of Columbus Council 2932 serving as a past Grand Knight, Knights of Columbus 4 th Degree Bishop Althoff Assembly, Sugar Creek Township Trustee, Catholic Fraternal Life, Habitat for Humanity, Sportsman Club, and Carpenter’s Local 480 in Freeburg. He enjoyed carpentry, was an avid St. Louis Cardinals fan, and loved spending time with his family and grandchildren and going to their sporting events.

Memorial Mass of Christian Burial will be Saturday, October 9, 2021 at 11:00 a.m. at St. Mary Catholic Church in Trenton with Fr. Joseph Rascher presiding. Interment will follow at St. Mary Cemetery in Trenton.

Due to COVID-19, the family is requesting everyone attending the visitation and mass to please wear a mask.

In lieu of flowers, plants, and other gifts, memorials may be made to St. Mary Catholic Church, Trenton Knights of Columbus Tootsie Roll Drive for the Intellectually Disabled, or Habitat for Humanity Greater Peoria Chapter and will be received at the church or by mail, Moss Funeral Home 105 S. Main St. Trenton, IL 62293, who is serving the family.