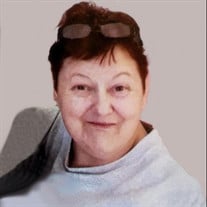 She was born on Wednesday, January 14, 1953, in Rock Island, IL, the daughter of William and Phyliss (nee Lundskow) Brandt.

Deborah was born in Rock Island, IL, and grew up in Coal Valley, IL. She was a 1971 graduate of Moline High School and a 1974 graduate of Barnes College of Nursing in St. Louis. During her 36-year career in nursing, she worked at Barnes-Jewish Hospital, Missouri Baptist, Home Health Agencys and retired as Nursing Supervisor at BJC West County Hospital in 2010. Deborah enjoyed her current dogs, Patches and Sarah, as she did the others before them. She was very interested in archaeology. She loved to read and still had her collection of Hardy Boys books. She enjoyed watching the hummingbirds outdoors, read murder mysteries and play the organ.

Interment will be at Coal Valley Township Cemetery in Coal Valley, IL.

Memorial contributions may be made to Animal Rescue of St. Louis County;
Highland EMS; or Grantfork Volunteer Fire Department.