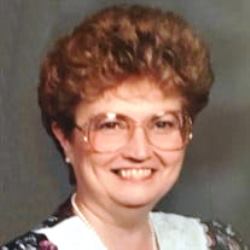 She was born on Thursday, February 23, 1933, in Highland, IL, the daughter of Walton and Helen (nee Durbin) Faires.

She was a member of . She was also a member of Edwardsville-Drusilla Andrews Chapter NSDAR.

Mrs. Witthaus was born in Highland, Illinois and grew up in Marine, Illinois, where she lived until November 1986 (except for a few months in 1953 when she lived in San Francisco, CA and in 1954-1955 she lived in Edwardsville, IL). She attended Marine Schools and graduated from Edwardsville High School in 1951. She held an Insurance Institute of America Certificate in General Insurance. Mrs. Witthaus was a member of the former First Christian Church at Marine, served as President and member of the Christian Women’s Fellowship, was a deaconess and Sunday School teacher. She was also a member of the Edwardsville-Drusilla Andrews Chapter NSDAR.She was a stenographer at the Edwardsville Community Unit School District #7; a secretary for the Madison County Superintendent of Schools; a General’s Secretary at the Presidio of San Francisco, CA; Assistant Deputy Clerk at the Madison County Circuit Clerk’s Office; and served as Financial Manager of Schmidt-Phillipe & Associates, Inc. (formerly Chuck Schmidt Insurance) Edwardsville, until retiring in 1986 after 26 years. She enjoyed crocheting, raising plants, gardening, traveling, and reading.

Funeral Service will be at 11:00 AM on Tuesday, September 21, 2021, at Spengel-Boulanger Funeral Home in Highland, IL, Rev. Nancy L. Brooks, Ordained Minister of the United Church of Christ, officiating.