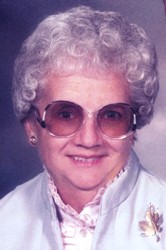 Gatha worked at the Marine Garment Factory and later at Alhambra Elementary School as a cafeteria worker from 1965 to 1977, when she quit to babysit her grandchildren. She enjoyed fishing, camping, and gardening, while also enjoying collecting bells and Precious Moments figurines. An avid quilt maker, Gatha always had a quilt set up in her living room every winter after Christmas was over. Gatha loved the time she spent babysitting her grandchildren and was later blessed to babysit her great-grandchildren. She loved her church and her family very much.